One of the little birds that frequent our space – a White Throated Sparrow! I just finished this one – a zentangle drawing against an abstract watercolor painting background. I called it “Zentangle Ribbons” because there are two-sided ribbons twisting through the piece, creating a subtle structure for the diverse shapes and textures in each area. More importantly, though, this was really fun to make! 🙂

I’ve adapted this piece for prints and products on a number of sites – feel free to browse!

We had an invisible visitor the other day! I’m thinking it was either Max the greyhound from up the road or the Bumpus’s hound dogs from the other direction – LOL. One of my favorite things to do in the laundromat is to stare at the wall.Â  *grin*Â  No, really! At least this half-wall that’s covered with those stainless steel, diamond-pattern plates that are often used in garages. In this particular landromat, the diamond plate wall sits opposite the large windows and reflects the sunlight and sky.

I love the scratchy scuffs that give this photo so much subtle texture too. Click on the image above to see more close-up details. And another terrific thing – this photograph is also available at the link above as a metal print! How cool is that?

Late last night we had gusty windstorm. We had been in bed for about an hour when we heard a noise somewhere between a big clunk and metallic thunk against/near the side of the house at the head of the bed. I assumed it was the slightly loose metal vent pipe getting pushed around – I even told John that’s what I thought it was.

This morning I had the impulse to go check and see if the pipe should be tightened up somehow.

Turns out I was wrong. It wasn’t the pipe. A 40-50 foot tree, dead for years, just on the other side of the property line in our neighbor’s yard, got blown over, toward our house. On the side right by our bedroom window and bed, AND the house propane tank.

1. If the tree had been just a FEW feet taller, it would have crashed though our bedroom window right over our sleeping heads. The top branch bent over to the left like it was reaching for it. As it was, only the topmost small branches scratched against the side of the house, just BELOW our window.

2. The metallic sound I heard was the central trunk of the tree JUST BARELY smudging the very end point of the propane tank. (I could see the 3-inch smudge mark.)

3. A branch off the central trunk, by the looks of it, had been sawed off many years ago. Had it NOT been sawed off, it would have come right down ON the tank.

And yes – photos! The arrows point to the sawed off branch, the top branches laying near the foundation of the house, and tree roots off in the distance (the white at the bottom right of that photo is the propane tank, for reference.) The window in the top left photo is our bedroom window. 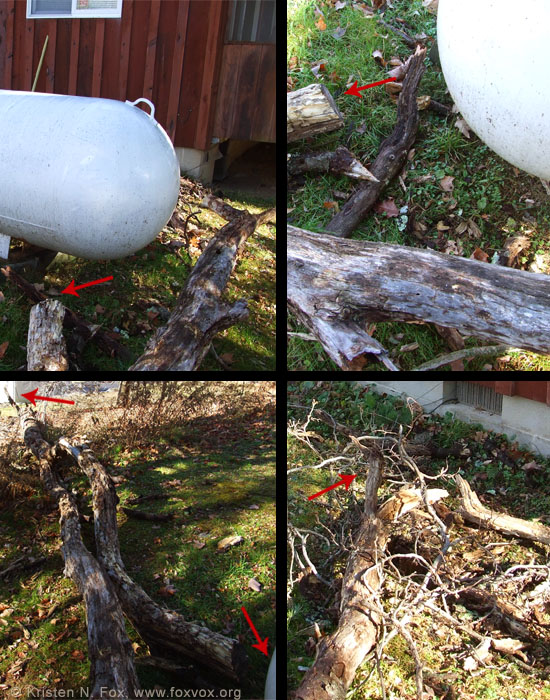 So – that happened! The tree was so dead and so dry/light that I’m not entire sure it would have done much damage to the propane tank itself, but it might have landed on the valves/connections on top.Â  BUT….. I’m not a propane tank expert. On the plus side, I’ve seen a number of propane tanks destroyed in various ways on Mythbusters, so I know they are pretty tough – LOL.

Mostly, I’m just crazy amazed at how exact that sawed off tree branch was, and the placement of the entire fallen tree itself had to be, in order for us to have no major damage as far as I can tell. (I was actually surprised that the tree didn’t go down in the last hurricane!)Â  And now we don’t have that dead tree to worry about anymore.

And…. whew! That was CLOSE!

I’ve got a new Celtic work of art to tell you about – my Celtic Stormy Sea Mandala! (Apologies up front for the obvious copyright notice across the image below.) The Art of FoxVox Celtic Stormy Sea Mandala is a deep sea of abstract blue, green, and dark purple shapes – spirals and knotwork, and movement that seem like octopus tentacles, flowing seaweed, hunting shark fins, irridescent oyster shells, spinning whirpools, and stormy waves! I chose colors that reminded me of the deeper, duskier tones that happen when a storm stirs up the deeper parts of the ocean. Click here for all of the Celtic Stormy Sea Mandala items, from apparel and shoes to playing cards, mugs, etc. The Celtic Stormy Sea Mandala also looks rather cool on home products – Shower Curtain, King-Queen-Twin Duvet Covers, Pillowcases, Throw Pillows, Clocks, and more!

You can also decorate your wall with the Celtic Stormy Sea Mandala as a fine art print – framed or unframed, and as a canvas print as well. Just click the framed image at the right (or click here) to see what options would look good on your wall. (I tend to think that most mandalas are also handy as a meditation focus.) Anyway, click on the framed image to see a larger zoom image of the actual design too.

As always, thanks for looking, and I hope you like it! 🙂

A really windy day made for a terrific Blizzard of Autumn Leaves – caught on video! The hiss you hear is because of the wind, and when the closeup leaves slow down keep looking in the background for more leaves falling. (Sorry it’s not HD and it’s optimized a lot!)

I know, it’s not THAT exciting, and it was certainly a bit more amazing in person, but I hope you enjoyed this glimpse into Fall, especially those people who live in other climates/zones and don’t get a lot of leaf color!